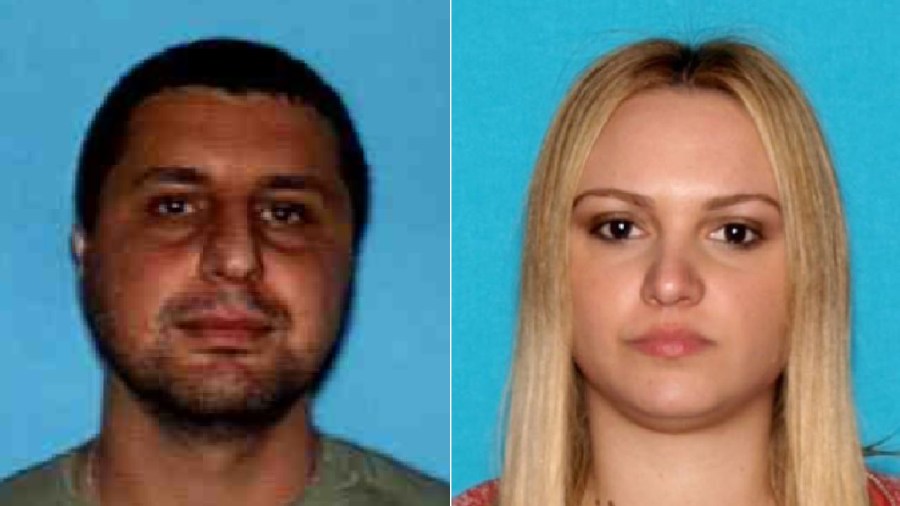 A fugitive Tarzana couple still on the run after their conviction in a COVID-19 relief fraud scheme was sentenced to years in federal prison as the search for them continued, officials announced Tuesday.

In June, Richard Ayvazyan, 43, and his wife Marietta Terabelian, 37, were convicted by a federal jury of conspiring with family members and others to bilk the government out of millions in Paycheck Protection Program and Economic Injury Disaster Loan relief funds.

But ahead of their sentencing, the couple allegedly cut off their monitoring bracelets and ran, according to the FBI.

A judge sentenced them in absentia on Monday, while they remained fugitives, according to the U.S. Attorney’s Office for the Central District of California.

The scheme involved using dozens of fake or stolen identities to submit fraudulent applications for approximately 150 loans, which they applied for with false identity and tax documents, and payroll records, officials said.

Some of the stolen identities belonged to dead and elderly residents, as well as foreign exchange students who briefly visited the U.S.

The funds, which were meant to help struggling businesses during the pandemic, were then used as down payments on luxury homes in Tarzana, Glendale and Palm Desert.

“The defendants lived a lavish lifestyle by defrauding the government at the expense of small businesses and American taxpayers already facing financial and pandemic-related hardship,” said Kristi K. Johnson of the FBI’s Los Angeles Field Office.

The FBI is offering a reward of up to $20,000 for information leading to the arrest of the husband and wife duo.

“The FBI is actively investigating the whereabouts of fugitives Terabelian and Ayvazyan and will pursue them until they are taken into custody to pay for their crimes,” Johnson added.

At Monday’s sentencing hearing, U.S. District Judge Stephen V. Wilson said he could not recall a fraud case conducted in such a “callous, intentional way without any regard for the law.”

The judge described Richard Ayvazyan as “an endemic, cold-hearted fraudster with no regard for the law” and someone who “views fraud as an achievement.”

In court, Ayvazyan’s attorney Ashwin J. Ram said that the family suspects that he and his wife were abducted, but prosecutors say there is no evidence to back that up, the Los Angeles Times reported.

The case was the first involving a pandemic-related fraud scheme in the country to go to trial, according to the Justice Department.

The three family members weren’t the only ones convicted in the case.

Manuk Grigoryan, 28, of Sun Valley, Edvard Paronyan, 41, of Granada Hills, Vahe Dadyan, 42, of Glendale and Arman Hayrapetyan, 39, of Glendale have all been sentenced in connection with the COVID-19 relief scam.

Tamara Dadyan, 42, of Encino, is also scheduled to be sentenced in December.

“The defendants used the COVID-19 crisis to steal millions of dollars in much-needed government aid intended for people and businesses suffering from the economic effects of the worst pandemic in a century,” U.S. Attorney Tracy L. Wilkison said in a statement. “These sentences reflect our office’s determination to root out and punish wrongdoers who use national emergencies to defraud the government and the American taxpayer.”